Totoro is the Angel of Death! Wait.. wha? 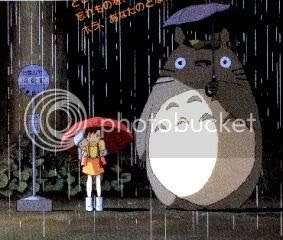 My Neighbor Totoro is a beloved children's film or is it...

There's some crazy theory I found online that Totoro is death... I don't buy it but Studio Ghibli movies usually deal with the spirit world so you never know...

1.It is saying that Totoro is in fact messenger of Death, and whoever sees him will soon die. The hospital that the sister's mother was in was based on a real hospital for terminally-ill patients.

2. Later in the story the villagers find a slipper in a pond, which is in fact May's, at this point she has already drowned in the pond. Satsuki lied that the slipper wasn't Mei's out of denial. Ever since this scene, the sisters appeared to have no shadow.

3. Satsuki pleaded the Totoro and the cat-bus to take her to where Mei is, while on the cat-bus, says "Nobody can see us...", this scene is Satsuki leading herself to the land of the dead (by taking the cat-bus).

4. At the hospital, the mother says "I think I feel May and Satsuki smiling there in that tree..." Why don't the sisters go and see their mom if they are already there? Why do they just leave the corn there instead? It is said that the sisters were dead at that point, and the Japanese pronunciation of "corn" is similar to "kill child".

5. The final scenes seem to be a happy epilogue, but they in fact happened "before" the major events in the movie.

6. The movie was set in a place in Japan where there was a case of murdering of two sisters which happened in the 60s. This event took place on May 1st, while the sister's names are Satsuki (May in Japanese) and Mei (May in English). In the real life case, the younger sister was missing first and the older sister was seen to be looking for her frantically. Next day, the younger sister's body was found in the forest (stabbed to death). The older sister was in such a state of shock and kept rambling ambiguous words about seeing a "cat monster", "great big racoon monster" etc to the police. The sisters were in fact from a single-parent family (mother died of illness).

Ever since these rumors started to circulate, people have been calling Ghibli for verification "is Totoro Death" "Why don't the sisters have shadows later in the movie", and Ghibli made announcment on their blog site about the shadow issue saying that there was no shadow because the animators decided there was no shadow needed in those scenes (maybe bc of light source etc).

Here is Ghibli's blog site with the responses: http://www.ghibli.jp/15diary/003717.html


Sounds fishy to me, especially the story about the murders. So little details.

All this is just a legend. Read more about .. complete this Japanese blog that makes a deep and detailed research on the subject. Denies this part:
"Apparently Her older sister found her body, but was so traumatized by it, When Asked what she HAD seen, she said Merely" I met a large Tanuki (looks like a racoon) "and" I saw a cat monster. "Sound familiar? Anyway, the older sister later Committed suicide."
次姉について。次姉は長兄の中学時代の同級生と婚約しており、事件の1年後に入籍していました。その数ヶ月後、石川さんに一審で死刑判決が出た直後からノイローゼになり（医師が正式にノイローゼと診断しています）、ほどなくして自殺しました。ただし、「となりのトトロ」の都市伝説で言われているような、「妹を捜して必死に歩き回っていた」とか「『猫のお化け』『大きな狸に会った』などの意味不明な証言ばかりしていた」という事実はありません。
(http://flowmanagement.jp/wordpress/archives/236#more-236)
That was not the cause of suicide.

For theory 2, it's not Mei's slipper at all. The one Mei had did not have a flower on it.

The hospital was most likely a tuberculosis sanatorium. My Mother told me that there were a few in our state. (Victoria, Australia).

In those days, they felt the cure was to place these buildings on hillsides in forested areas where there was a lot of clean air... or at least the air was easier to breathe than city air.

it wasnt even may's slipper though, they found a sandal and may was wearing yellow shoes